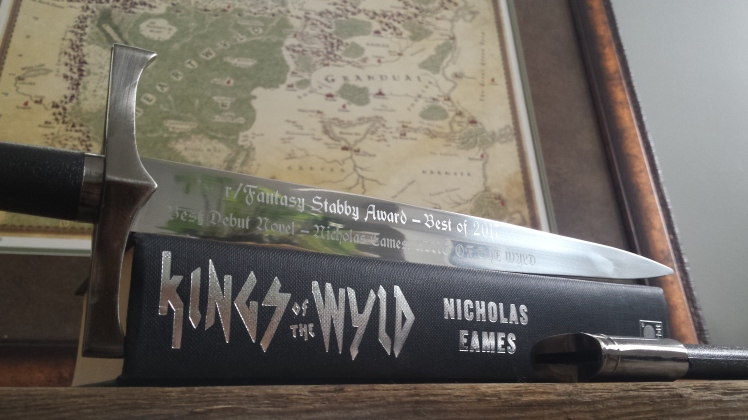 Seriously.  I once took part in an 8-person footrace where they gave out ribbons for 7th place.  I swear I tied the kid in 7th, but his mom was the judge and I went home empty-handed.  Well FUCK YOU, BRAD (AND BRAD’S MOM!)  I HAVE A STABBY!!!

In seriousness, though, I cannot believe I won this.  This beautiful award for Best Debut Novel was granted to KINGS OF THE WYLD by the community at r/fantasy.  I am so incredibly grateful for their support, and proud to be an active member of such an enthusiastic and fast-growing community of readers (now over a quarter-million strong!)

It’s one thing to see your book’s name be mentioned on the r/fantasy forums as a favourite read or as a lighthearted alternative to the shadow of Grimdark sweeping o’er the land, but what moves me most–what gets me right in my Guy Gavriel Kay-loving heart–is when my book is recommended (as it sometimes is) to those feeling lost, disheartened, burnt-out, or bone-deep tired.  It’s a rough world out there, my friends, and the books that once offered escape from grim reality now feature grim realities–and that’s not at all bad.  It’s important, even, because we need to see heroes rise from the muck and, if not conquer, then at least endure.

KINGS OF THE WYLD is not a grim book.  If you want grim…well, just wait for BLOODY ROSE.  KotW is about the lasting bonds of friendship.  It’s about hope, and heroism, and men who aren’t afraid to turn to their best friend and say, without even being stoned, “I love you, man.”

Among the most touching messages I’ve received this past year was from a father (an r/fantasy member) whose daughter spent two weeks in the ICU. He picked up my book shortly after she was admitted and wrote to let me know that reading it lent him strength and sustained his hope throughout their ordeal, and no: I can’t even write about it now without tearing up. It’s messages like these (and many others from the giving and gracious r/fantasy community) that are by far the greatest reward a writer could ask for.

“As individuals they were each of them fallible, discordant as notes without harmony. But as a band they were something more, something perfect in its own intangible way.” 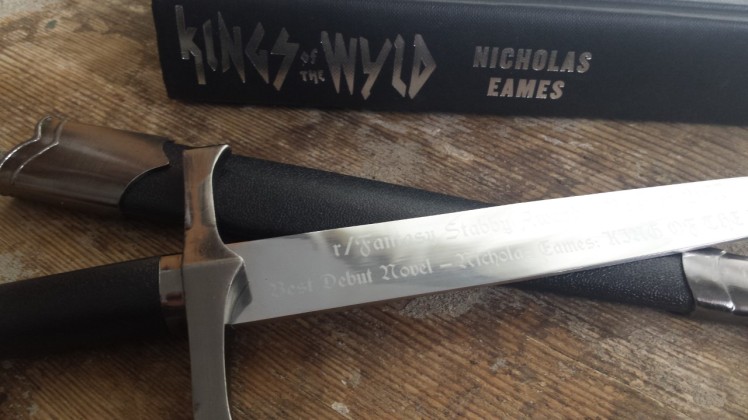 4 thoughts on “My Very First Award!”