If a blog was a bookshelf, mine would be coated with a layer of dust.  Over the past few months I’ve watched (first in anticipation, then in delight, now in stupefied awe) as my longest-held dream became a reality: my debut novel, Kings of the Wyld, was unleashed upon the world.

By ‘unleashed’ I mean it skulked timidly onto the fantasy scene like the new kid at the high-school dance.  Like any nervous teenager, it had been told by its parents how special it was, how perfect in its own unique way.  Nevertheless, it was keenly aware of its shortcomings, and hoped to hell the others would see past them.  Heck, maybe they’d even ask it to dance…

Then February came—the music started playing—and my precious, perfectly flawed book has been dancing ever since.

So now here I am: throwing open the blinds, wrenching open the windows, and blowing the dust off ‘ye old blogge’.  Why?  What matter was so pressing it deserved priority over sorting out the (hopefully) awesome climax of book two?

In a word, Gratitude.

In my novel’s acknowledgements, I was able to thank those without whom the book would not exist—chiefly, my agent, my editor, and some friends whose support was invaluable along the way.  Since February, however, I’ve found myself indebted to so many more—people without whom Kings of the Wyld might have languished in obscurity, or, to revisit my former analogy, stood alone against the wall until the music ended and then gone home grumbling that “dances suck anyway”.

First, a shout-out to every friend/acquaintance/co-worker who, after years of asking me, “How’s the book coming along?” went and BOUGHT THE LIVING FUCK OUT OF IT when it finally did.  Getting pictures of their smiling faces next to Kings of the Wyld has been one of the greatest pleasures of my life.

Next, there are the denizens of the interwebs who have gone above and beyond to promote this book.  Although there really are too many to name, I’d be remiss if I didn’t mention a few who have been (and continue to be) constant and cherished allies over the past few months.

Mike Everest, whose passion for writing and hunger for insight has led him to author some truly enlightening interviews and articles featuring 2017’s daunting crop of debut authors.

Drew ‘The Tattooed Book Geek’ Weldon, whose enthusiasm for KotW has spread like a virus through the fantasy blogosphere—a feat made possible thanks to how highly his peers value his opinions.

Petros Triantafylloy, who runs the formidable booknest.eu and has been a champion of this book long before it even existed.  Your generosity continues to astound me, Peter. I hope your accolades grow half as fast as your library!

Rob Matheny and Philip Overby, the proprietors of The Grim Tidings Podcast.  What you two have achieved together without ever having met in real life (it’s true!) is astounding.  Keep up the great work!

The folks at Fantasy Faction have been hugely generous as well, both those in charge (Laura and Mark among them) and the bevy of readers and writers who congregate in their facebook group.  I’m so happy I’ve found them all.  Even you, Dyrk.

Lately, two extremely talented artists have produced some incredible pieces based on the book.  Scott McCauley, a long-time friend and prolific tattoo artist, has been doing meticulously detailed character portraits, while Felix Ortiz (who I will hopefully refer to as a long-time friend a long time from now) has produced some truly stunning paintings depicting scenes from the book. The fact they’ve dedicated their time and talent to bringing these characters to life is incredibly humbling. 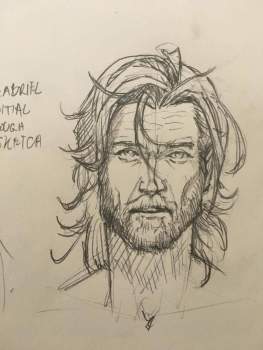 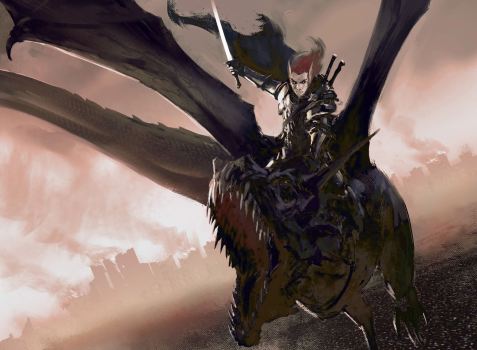 Thank you, too, to everyone who has taken the time to read the book, and especially those who have been gracious enough to review it.  As a debut author, it seems reasonable to say that those first few reviewers hold the immediate trajectory of your career in the palm of their hand.  You might have crushed me, friends, but instead you’ve given me wings.  Or, in some cases, strapped a rocket to my back and lit the fuse.  I honestly wish I had time to thank you individually, to tell you how truly gratifying it has been to read your posts, and columns, and blogs.  I owe every one of you a beer (or a coffee, or a whisky, or even a fucking disgusting bubble tea if that’s how you roll), so feel free to remind me in the event we ever meet!

Although I’ve thanked him often and everywhere, Sebastien De Castell continues to be an incredibly supportive friend and mentor.  His emails are unfailingly timely, always informative, and brimming with more wisdom than a bathroom stall with a diarrhea-afflicted Confucius locked inside. Also, his books are fantastic.

Sick of all this gratitude yet? Bear with me, friends—I’m almost done!

Aside from all the wonderful people above, my agent, Heather, and the publicity folks at Orbit (Nazia, Ellen, and Dominique) contact me periodically with news that quite often leaves me clapping with childish delight.  Some writers say work email is a drag.  I’ll let you know when that happens, but you might be waiting a while.

I’ll confess that, being new to publishing, I haven’t a clue how most authors and their editors get along. I’ve heard everything from respectfully cordial to outright standoffish, but Lindsey has become a friend I hope to know for the rest of our lives. When someone—usually a close family member—is rooting for you to succeed, it becomes a near-tangible thing you can sense across all the miles between you. That is what having her in my corner feels like.  And not only her: her husband, Daniel Radclif—er, Ben, and her amazing parents, have been cheering us on every step of the way. There are many miles between Tennessee and Ontario, but I can feel the love, and I appreciate it more than they know.

What I’m taking way too long to say is that Abercrombie and Redfearn aren’t the only unstoppable duo in town anymore, so bloody-well deal with it!

Whew! Done. Have I missed someone? Probably. But I hope you’ll trust that a blog-post is not the summation of my gratitude. I move through each and every day knowing that I am surrounded, supported, and uplifted by a legion of incredible individuals.

It is, to put the nail in the coffin of this revenant analogy, the best damn dance I’ve ever had the pleasure of attending.

Thanks (last one, I promise!) for reading,

(For those who’ve stuck it out this far, a gratuitous Moog pic. You’re welcome.) 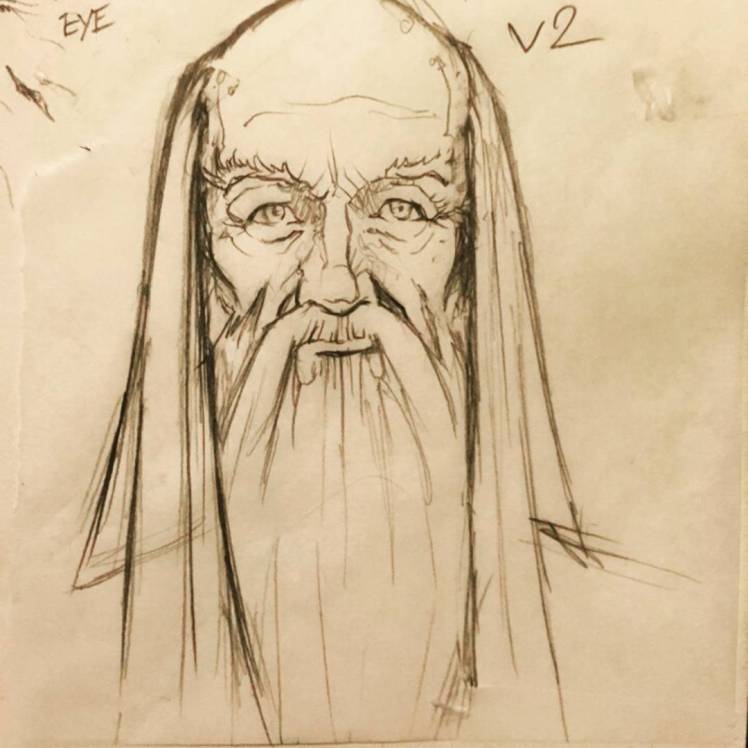 9 thoughts on “Swinging the ‘THANK YOU’ Hammer”